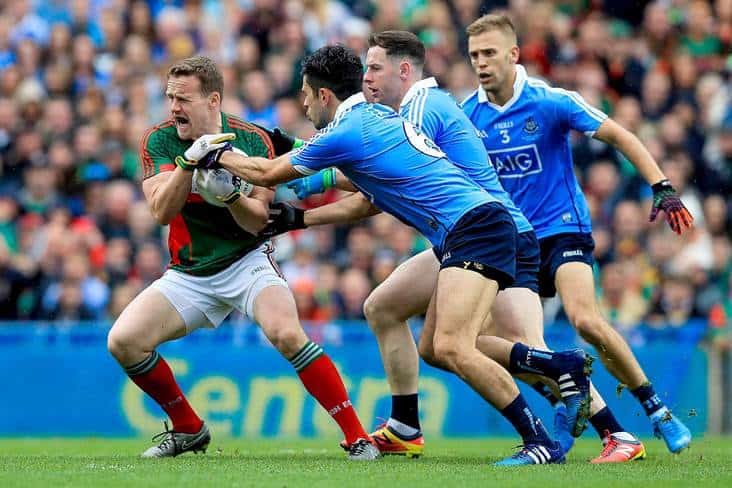 Captain Cillian O’Connor’s 77th-minute point earned Mayo a 0-15 to 2-9 draw with Dublin in a surreal decider at Croke Park.

In a game played in dreadful conditions, which made quality football nigh on impossible, Stephen Rochford’s men showed tremendous heart to overcome a luckless five-point interval deficit and subsequently to come back from three points down with as many minutes of normal time left. With the floodlights on and rain hammering down, O’Connor drove through the middle at the Davin End to bang over his seventh point deep into added time, after he and Donal Vaughan had kept the westerners in it.

The sides will meet again on Saturday week and there is definitely room for improvement in both camps. In truth, Dublin didn’t turn up today and it was really Mayo’s game to lose. They didn’t lose in the end, but they didn’t win either.

The defending champions led by double scores at the end of a bizarre opening half during which their opponents registered not one, but two own goals! Sweeper Kevin McLoughlin had the misfortune of poking the ball past David Clarke in the ninth minute, while Colm Boyle did likewise when tackling Dean Rock on 22 minutes.

Jim Gavin’s out-of-sorts charges didn’t grab a score of their own until the 31st minute, when Rock swept over a free to make it 2-1 to 0-4. Substitute Paddy Andrews – a replacement for the wrongly black-carded James McCarthy – pointed either side of a Jason Doherty effort and a second Rock free closed the first-half scoring.

Tom Parsons and Cillian O’Connor (free) had given the westerners a steady start and they had further points from O’Connor (free) and Vaughan in response to the two OGs; amazingly, despite not hitting any scores themselves, the hosts led by two points after half an hour (2-0 to 0-4).

When the teams emerged from their dressing-rooms simultaneously and got to know one another as they made their ways onto the field 30 minutes before throw-in, we sensed this was going to be an unflinching contest. Dublin won the toss and opted to attack the Davin End goals in the first half, which they didn’t do to very telling effect.

They could have had a third goal only for Clarke’s excellent save from Brian Fenton but, generally, Dublin’s first-half display was nowhere near their best. For Mayo to hold the holders to no scores from play for 33 minutes and yet trail by five points at the short whistle must have been soul-destroying.

But then showed some fight when the action resumed. Andy Moran reduced the arrears within 30 seconds of the restart and it was a one-point game by the 40th minute after wing back Patrick Curcan and O’Connor (2) continued the fightback. O’Connor’s 46th-minute free had the sides level for the second time after Jonny Cooper and Rock had missed at the other end.

Fenton landed Dublin’s first score of the second half in the 51st minute and Rock made it a two-point game as we went into the fourth quarter. Moran sliced a rasping shot a few inches over the Dublin crossbar to halve the deficit again and substitute Alan Dillon equalised six minute from time.

Wing back John Small restored Dublin’s lead in the 66th minute and they had further quickfire points from Rock (free) and Connolly to move three clear with as any minutes left. But O’Connor’s sixth (free) and Vaughan’s second left the minimum between them again as we moved into seven minutes of injury time…

Right at the end, the Ballintubber clubman – who shouldn’t have been on the field as he somehow survived a clear black-card transgression – hit the point that will bring these two teams back to Croker on October 1st. Sam is in limbo now for 13 days; Dublin will have home advantage again for the replay; another sell-out is guaranteed.

READ MORE
We use cookies to ensure that we give you the best experience on our website.OKRead more